Over the past few years, we have enjoyed working with community leaders to not only support their grassroots projects, but to also leverage their expertise in certain areas where we are not able to create programs  for the disability community on our own together.

One of these individuals is Ryan Martin, whom we have known for over 3 years. Ryan is a motivational speaker from Connecticut, as well as a coach and professional wheelchair basketball player in Spain. He is the founder and director of the non-profit organization, The Ryan Martin Foundation. The Ryan Martin Foundation organizes wheelchair basketball camps for kids with disabilities to provide them with important tools to become more independent.

Summer times are especially hectic for Ryan, with nearly no time to rest in between the camps. He coaches primarily in the northeast, including Connecticut, Boston, New York and Philadelphia. He also runs a camp  Madrid, Spain, which is one of the most popular ones.

The ABC Medical team is glad to have had the opportunity to support the Ryan Martin camps these past few years, and to watch the campers grow incredible physical and social skills.

This year, I personally wanted to attend one of the camps to get a chance to meet the kids and their families, and to be part of the whole experience that was happening in our hometown, Philadelphia.

One of my favorite things about these camps is to witness the excitement of the kids as they get into their cool sports chairs for the first time, usually twice their size because they borrow it from someone else. They don’t care as long as they are on the court playing with their peers. Their eyes glow when they make a shot or pass the ball to their teammate for the first time.

This year, we met an 8 year-old first timer named Xavier, who sustained a spinal cord injury due to a gunshot. Xavier immediately became a star at the camp with his contagious smile and the way he challenged himself, despite being one of the youngest ones there. He also was making so many new friends!

Back on the benches, I sat and spoke with parents who told me about the activities they are currently involved with and who also asled me about other programs that might be available to them. I loved being able to help them by sharing some of the hundreds of resources we have accumulated at ABC Medical through our National Adaptive Resources Guide. Some had been to the Life Rolls On/They Will Surf Again event in Wildwood, NJ  for the past two years and some had gone surfing in Costa Rica as a family. It seemed to me that the more family involvement in a sport, the more they wanted their kid to try other activities, because it would give them more quality time to spend with each other. “The power of adaptive sports!” I said to myself. “It, indeed unites us.”

As I was talking to Xavier’s mom Michelle, her younger son "T" rolled up to the benches towards us. He stood up, grabbed his water bottle from his mom, sat back in the chair and rolled away again to the court. I had been watching him for hours in a chair and had not even thought that he might have been able-bodied. “T” gulped some water from the bottle and gave it to his brother, Xavier. They gave each other a high five in the middle of the court and then started racing to the other end. The whole scene reminded me of that Guinness commercial, featuring able bodied and disabled athletes playing wheelchair basketball together. Or even more recently,  the Canadian Tire company published a short video ad for the  "Canadian Olympic Team- wheels" campaign in early August,  featuring kids playing basketball and inviting another kid in a wheelchair to join their team. This tearjerker ad soon went viral as it promoted inclusion and unity at a young age.

Check out that video here.

Another mom told me that her older son Duncan, who is able-bodied, was playing today with his brother who has cerebral palsy. Both brothers were very good and fast learners. 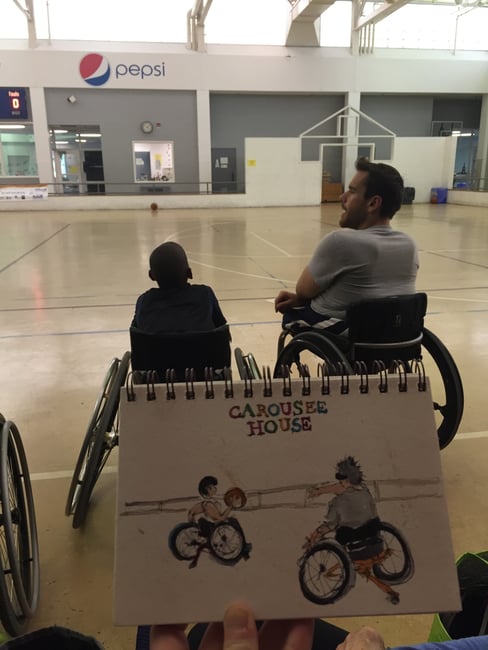 I had to let this experience sink in for a second. I realized how significant it was. I noticed a trend was slowly setting: A trend that can potentially change an entire culture. These kids coming from different backgrounds and places were the pioneers of inclusive sports.  The goal? To create open societies where everyone, regardless of their ability levels, has an equal opportunity to participate in a sport and play together.

No one could tell which child had a disability and which one didn't among the kids that day at the camp. No one really cared about knowing it either. The kids all looked equally able to compete in wheelchair basketball after proper training. It made me think about what a dear ABC friend, the founder of Ocean Positive, Bruckner Chase once said, "In the water on that paddle board, everyone is equal!" Wheelchair basketball is no different. 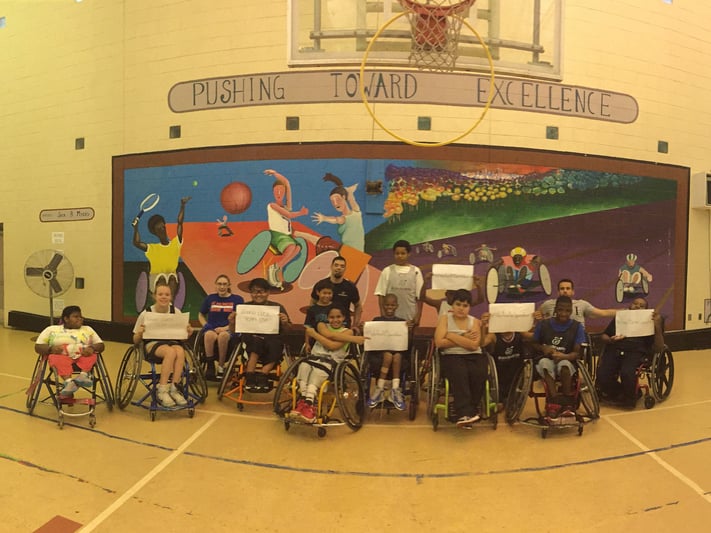 I know Ryan has been very involved with the inclusive sport model, working closely with Ted Fay on ECAC's recent adoption of it.This is going to help expand wheelchair sports to many other colleges by bringing students with and without a disability together to form inclusive environments.

It was at the Carousel House in Philadelphia that I saw this in its purest form, and it was extremely exciting. I look forward to seeing what happens next in this project.

Thank you to the Ryan Martin Foundation for contributing to this change!