Now I Can See

Now I Can See

Full court vision I have always had. My keen eyesight always taken for granted.

I see the leaves blow on a windy day.

I see how red a cardinal really is as it flies through my backyard and perches itself in front of my window facing the green of all the trees that consume my view from that window.

I watch with passion, my favorite baseball team on TV and see the best pitcher in the game, throw a curve ball that hangs and leaves its batter shaking his head as it’s called a strike.

I see my children’s face and the clear expression of happy and sad. It’s impossible to list all I see each day and each moment.

This is my 3rd blog on James Douglas Yates Jr or as I nicknamed him ‘LJ’. When he was little he was called Little James being he was a junior after his father’s name, James Yates. LJ was a hip nickname for a baller like himself. If you have read any of the blogs before you know that LJ is legally blind with Cerebral Palsy. If this is your first read get ready to have your mind blown. This now 16 year old has become the most dedicated wheelchair basketball player I have ever seen and I have seen them all in my 43 years of playing the game at every level. Now you should be asking "how can this kid play ball when legally blind?" It’s a question I have asked as his coach a thousand times. I have been asked how in the world does he see the basket as he swishes three pointers like they were lay ups. I have attached a short clip of LJ making a ¾ court shot.  I have asked him so many times what he sees and he can only say “I see the orange of the rim”. If I come into the gym and he is at the other end he squints and knows its me by my silhouette and how I push my chair.

All this being said he is in the gym at Lowes YMCA in Mooresville, North Carolina every single day during the summer and stays all day and into the evening. His mother Kim gives him the assist of food and hydration in his bball bag to sustain his long hours. I have had an incredible work ethic over my career but does not hold a candle to this gym rat. During the school year, he can’t put in the same amount of time because of his studies and he does really well with grades but yet again challenged with vision,  his face very close to the book he has to read or the computer he has to work on. His glasses are mandatory but can only be moderately effective if he is very close up. As my eyes now, very mature, (lol) struggle to see the font on my phone LJ has to put his phone inches away from his eyes. Let me show you an example of what this teens vision is truly like. This example really helped me understand just how God has made a miracle of this challenge. Yes I said God get over it !!

Take a look and be grateful that it’s so easy to see these  two photos. 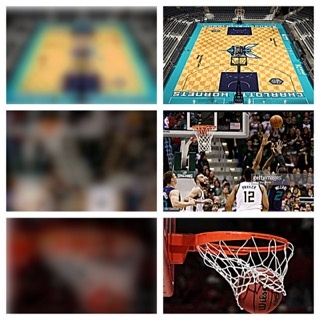 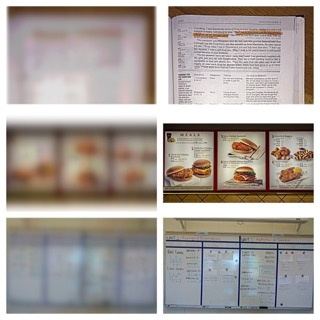 “I'm LJ Yates and I've never been able to see clearly until this week when my vision went from 20/250 best corrected to 20/20 with a miracle new development in high tech eyewear by a company called Esight ! I can't believe how clear I can see with them - I can watch TV now and even go to a UNCC basketball game and see the players clearly - these are things I could never do before”

If you can comprehend what you just read the Esight company out of Atlanta has created the opportunity for individuals like LJ to wear an assistive device that allows James Douglas Yates to now really see his mother’s face and that his father has well a groomed mustache and goatee from across the room or gym floor. He can tell his little brother Josh has his really blonde hair, that he has three beautiful older sisters. He can now watch a movie and see the screen from the couch. I can take  LJ to a Hornets game and he can actually see the crowd, the score, and the players. He can even see the cute girl that just pulled up to get popcorn in the line where he waits for his. How can I not be emotional right now. This Esight system has a price tag of $15,000 !!!  Yes that’s right.

After an adaptive fishing trip put on by my Turning Point Chapter (Adaptive Outdoor Adventures) on Lake Lanier, in Cuming GA, where LJ caught his first fish and a good sized striped bass,  we drove back north toward Lake Norman/ home. We went directly to a fundraiser in his name, to make another miracle happen and raise this crazy amount of money for LJ’s ‘full court vision’ ! Gathered were about 50 people from our community and many members of the Lowes YMCA where we are members and where LJ makes his home for the summer. It was heartwarming, to see and feel the support as all $15K was donated by so many different friends.

As I was writing this blog I needed to show you LJ’s ¾ court shot, that’s a hail Mary for most adults or even pros. I had a video but could not find it. I text LJ and his mother, Kim and asked them to send it to me asap if they would. The phone rings and LJ states he could not get the video to download so he proceeds to say I had a friend here at the Y take a video and on my 4th attempt I swished one from ¾ court. I was speechless. I had never made a shot that long ever!!!! ….over my entire career. I could give the best bball player 20 shots at this distance and most likely that player could not connect ??? Once again LJ blows my mind ! Take a look for yourself and this is with Blurred vision.  I just laughed out loud by myself watching him do what is the norm!!  This Kid ???

This is my take as his Coach. Esight cannot help him shoot better. He shoots just fine and better than most with his fuzzy sight. Esight will help him see all the beauty of life we all take for granted or maybe I should speak for myself. I take so much for granted. The flight of a bald eagle for example. On our fishing trip I spotted a bald eagle and all on the boat marveled because it’s such a treat. Gavin Cloy our guide said “LJ you see that Bald Eagle”? and LJ’s response “I think so”? Coming back this past Sunday from Birmingham AL and a Juniors basketball camp I said to LJ hey do you see that rainbow? His reply was “kinda”! Spectating anything was not enjoyable for this young boy. Now he is engaged in life at all visual levels with Esight. I am so happy for him as he so looks forward to more time with his new eyes !!

There has been times where James behavior has not been the best, so let’s be clear about that ! He is no angel but he is a miracle. What a blessing young LJ has been to me over so many years.

My goal over the next few days or as long as I can sustain it is to pay attention to what I see like right this moment as the sun is setting out my back window and the water sparkles like diamonds. The green of the trees is deep and penetrating while the ferns hanging off the deck spin so slightly from a small breeze.