The Circle of Life: A Story about Unconditional Love

After my spinal cord injury in 1973 my biggest fear and concern was not getting my legs back.  Sounds weird? I was told early on by a hospital acute care aid that I probably would neither be able to have kids nor walk again. He spoke out of turn and my father later had that guy pinned up against the wall for telling me that. Well, I was certainly crushed by the news, like my spinal cord. My foxhole prayer to my God was that if he was going to take my legs, please ‘Lord let me have children!" I prayed this over and over as I laid in my hospital bed at Rancho Los Amigos Hospital in Southern California. Why I felt that way back then, I’m still not sure. I had a constant vision of being a father, having a beautiful wife and become a parent and yes, even a grandparent at the age of 19. So, after my 4 month stay in prison, aka rehab lol I was turned loose on the world with a new life in front of me. A life I was petrified and uncertain about. In the prison rehab, I was safe and protected. I didn’t want to leave as I had no confidence at all and especially with girls or women.

The new life began whether I was ready or not. I could accept it or fight it. Fighting it made it worse,. Thank God for wheelchair basketball and all the other sports I chose to excel in, but mostly to distract me from a life with paralysis. I traveled on a fast track of sport, mostly basketball in the beginning. Then track, then tennis and alpine skiing were my year round endeavors. I rose to the top of every sport I participated in not even taking time to realize what was happening or what it meant to me. I look back and see a young man trying to prove something that dwelled deep inside. As if I would not and could not accept that I was anything less, because of paralysis. Trust me, back in the 70’s it was not an enlightened time like it is now. I wanted everyone to feel comfortable with me, especially my helpless family and friends. I think I succeeded and I morphed into a man that was so confident it was almost a curse. I felt like there was nothing I could not do…..nothing was impossible!!! If you had a problem with my wheelchair well, ‘you could kiss my grits!’ 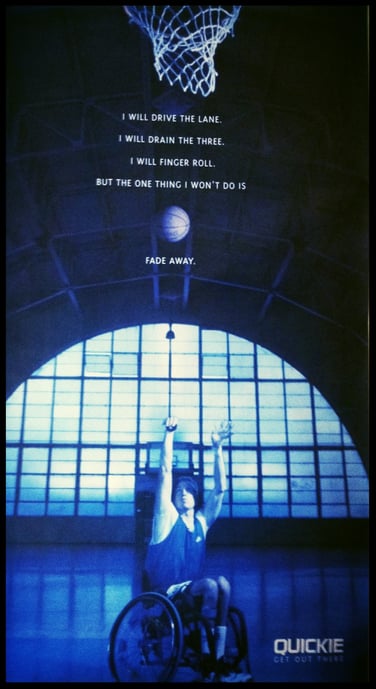 I got hooked into the right crowd right away, which is the only reason I survived after my injury. The great influence of Ed Owen and Jeff Minnebraker on me who even to this day have a wheel print on my life and who made me who I am today. Ed brought me under his wing and exposed me to the ‘Game’ I was immediately on a team that nearly could not be defeated.

In 1976, I went to my first Paralympics on the US National Team and won Gold. I went to national championships (Final Fours), my first 3 seasons only to finish second in all three. The third was in Cleveland, Ohio. Now on my own in Sacramento where I got my degree in Therapeutic Recreation, with teammates who had no business of making a Final Four upset everyone on our way to the final. We lost!!! But, I met that beauty I mentioned earlier and even though her team, the Music City Wheelers beat us by 13…. I married the scorekeeper seven months later.

Sandy said “yes” to me, knowing we may not be able to have children. That says a lot about a gorgeous 25 year old woman. The thought of not being able to have kids still haunted me in the back of my mind. Boom!  Within the first year Sandy was pregnant with our son Justin. Danielle came four and half years later. I got exactly what I prayed for in those dark days of rehab prison, as I used to call it. I have softened on that view today and try not to call it prison anymore. Lol

I know it could have been different. So many people with SCI either can’t have their own children or have to get help form modern day medicine or techniques. Some adopt and become great parents.

I was in my prime at the time when my son was born and athletics came so easy, but only with hard work. Justin traveled everywhere with me and all of the wheelchair basketball and tennis world knew him. They all got asked to shoot with him or hit some tennis balls. Grateful to all of you who took the time to play with my son!

After more than 5 decades of excelling, organizing and creating opportunities for others in adaptive sports what does this all really mean? Gold medals, world championships, national titles, win streaks, mountain climb and technology firsts in wheelchair development. Don’t take this wrong, but it’s all fodder to me where I’m at today. In all the sports I have impacted and achieved, most of it has been forgotten. It’s kind of natural the way it happens and I’m ok with it. I know what I did and if it matters to my family that’s enough. Meaningful to this day though is that I was the first wheelchair athlete to be featured in Sports Illustrated and was with both my kids in 1987.

My prayer in beginning and after SCI was not to become the greatest at wheelchair basketball or any other sport. Nor to win gold in 3 different sports. It was simply to become a father and a husband. I was granted and blessed with this opportunity and is all that matters to me… truly! In being blessed the prayer is still at work in my life and my wife’s life as now Grand Parents! My daughter and my son and their spouses Bethany and Randy gave us the miracle of life: Cruz is 4 and half months old and Lucas was born just two days ago which is a game changer. The greatest gifts ever named Cruz and Lucas. 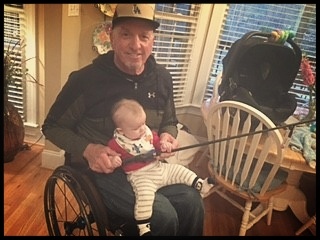 Cruz  with his first fishing pole 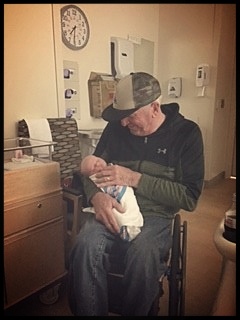 My second grandson Lucas, only a week old

I am perfect for this awesome responsibility: Being in a wheelchair and a grandfather is not a challenge to me at all. I’m like the ‘Stroller Man’- I have a natural stroller, but with human contact. My grandson Cruz fits perfect in my lap and Lucas, a new born is just around the corner from that ride. I give them motion with 360’s which is hard to do in a real stroller. I hope they never get tired of my lap. I will stay fit and strong for them. I want them on my bass boat or in a blind anticipating mother nature showing itself in all its splendor. Shooting hoops is a given. I want to see them in a play or a band or do something meaningful. I will be a teacher, a coach, a baby sitter, a role model, or anything the job calls for, because as I have always said ‘Much has been given me and that much more is expected." I will dedicate my life to my kids and grandkids and that example is the greatest gift I can give them in return, so that circle of life is passed on.

My grandkids might call me Poppy or whatever they want. Every sound they make makes me smile. I have a new rock in my role, because of them. My message to young readers is you are never too young to think about being a grandparent. Hopefully you have had that experience where a grandparent changed your life and was such a part of it. To all the grandparents out there I am preaching to the choir… you know. 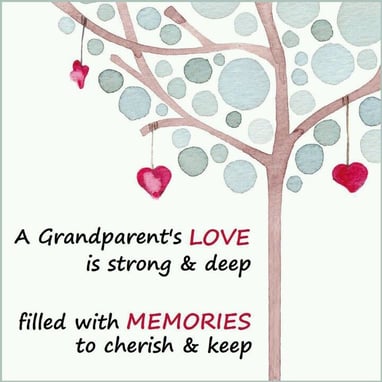 It’s a true privilege to blog for ABC Medical. To be able to express myself in this way means so much to me. So thank you… is just not enough but hopefully as I pour my heart out in some of these blogs you feel what words cannot convey. ~ DK

ABC Home Medical Supply, Inc. provides urological supplies, such as intermittent, external, and foley catheters. In addition, we provide ostomy, wound care, and incontinence supplies products. We provide our services and products to individuals with a spinal cord injury, spina bifida, bladder exstrophy, or anyone that has a neurogenic bladder or bowel. Additionally, we serve individuals that have had any type of ostomy surgery. Call one of our customer advocates now at 833-235-6887 for a personal consultation on your health condition. We will verify your insurance coverage, contact your health care provider to obtain authorization (written order) for your supplies and send a 30 or 90-day order depending on your request and/or the requirements established by your insurance.
ABC Home Medical Supply, Inc. • 900 E Prima Vista Blvd.,  Suite 300 Port Saint Lucie, FL 34952  • T: (866) 897-8588 • F: (877) 785-7396
Terms and Conditions • Privacy Policy • Code of Ethics
Pursuant to 45 C.F.R.164.504 (d), Twenty Second Company, Inc., hereby designates itself and its subsidiaries; ABC Medical Holdings, Inc., ABC Home Medical Supply, Inc., Southeast Medical, Inc., MiMed Supply Co., Inc., Freestate Medical Supply, Inc., MLK Associates, Inc., Urological Services of America, Inc., Arkansas Medical Supply, and Phoenix Medical Services, Inc. to be known as "the affiliates" and from time to time, as a single covered entity, solely for the purposes of the above referenced regulations. © 2020 Twenty Second Company, Inc. All rights reserved.