The Gift of Our Senses: You Understand the Value When It's Gone

When I think of all the gifts I take for granted I guess the list is fairly extensive. I’m sure I am not alone in this regard as the things we would hold so dearly are often over looked in our day to day lives. As I write this blog I am reminded of how important my senses are.

I just finished my breakfast which was a tasty bowl of yogurt with fresh blueberries. My sense of taste was immediately aroused as the start of my day ordinarily begins with the taste of something good, be it a cup of coffee as an official daily eye opener. There is that moment just before where I smell the distinct goodness of a fresh pot that stimulates anticipation. Yes, according to Winnie the Pooh, where he says “Yes I love to eat honey, but there is that moment just before I begin, that is so much better”. Profound.

Need I mention the aroma of bacon, cooking in the skillet or the smell of a gardenia flower! A Christmas tree going up or coming down and the sense of smell fills our warm home. I don’t care who you are or what your background is, the gift of smell is universal and powerful and we overlook it each and every day. As I hit my keyboard to finish a thought I listen to a CD I just recently cut of some of my favorite tunes from my high school days, where rock and roll played such a significant role and still does to this day. My ears hear the voices and instruments as artists express their passion through their music on my Bose cd player. The sound that comes from such a small piece of equipment that Bose has mastered since its beginning. I listen to music every day in my crib or in my ride. As the bass in my truck is pumped up, my wife feels my arrival in the driveway, as I like it loud. Yesterday, my grandson Cruz now 4 months old, spends two days a week in our home while my daughter/son in law work. I hear him begin to sing and he learns to coo and make baby noises that quite possibly might be the best sounds ever !!

The sound of a crackling fire in the center of our home whether you can see it or not you hear it and it's a comforting melody.

My day also started with a hot shower, as here in the Carolinas we expect our first snow this evening and I prolong the experience, as I am chilled with first snow thoughts. The fire I spoke about earlier warms either side of my body, which ever I choose. It feels so good! There are those who through spinal cord injury have lost the sensation of feel. Yet I still take it for granted, another example of a gift not given its proper attention until it’s gone.

I have written a number of blogs about LJ Yates and his challenge to see like the rest of us with two good eyes. The miracle of sight which he only has when he uses the E-Sght device but even without it he can see the rim while he swishes shot after shot which is the real miracle. I have a new respect for what he has overcome.

I blogged about my trip with my son when we traveled to Cincinnati for a 4 game series with the Dodgers and the Reds back in August and all my senses took in a great time with my son as we watched our favorite team the L.A. Dodgers win 3 of 4. I took for granted my visual gift of seeing everything even a great fireworks show. What I did not mention in that blog was that while driving home I had a crazy situation occur with my right eye. Two thirds of the way home while in West Virginia my eye went berserk as a kaleidoscope of color and motion enveloped my vision. I had to pull over and let my son drive the rest of the way home. I went to an ophthalmologist first thing and he referred me to a retina specialist after informing me I had a vitreous hemorrhage and a retina tear in that eye.

I became very nervous as my sight was nearly gone in my right eye. That same day the doctor explains I need laser repair. Never having  a problem at all with my eyes and matter of fact my vison had been a great asset I was blessed with as a point guard all my life and had great ability to see what others may not have been able to see i.e. a deer in the woods, a hawk in a tree or fish in the depths. I even formed a company with the name ‘Full Court Vision’. I reluctantly went along with his plan. I asked point blank for him to bring his ‘A Game’ and he did the surgery. The recovery was to take a while as everyone healed and recovered at their own speed I was told. So never knowing anything about floaters in ones eyes, I dealt with the temporary vison loss but within weeks I showed immediate improvement and after a few months it was a distant memory. I was wrong.

Driving home on a Friday afternoon I had the same eye blow up again with black jelly fish (Man O War type)  like things and full loss of sight in the repaired eye. I called my doctor and he met me at his office on a Saturday morning and explained that sometimes a blood vessel can burst at the sight of the surgery. Great !! Now I wait for things to clear but they show no signs of improvement after a month I am still totally blind in my one eye. So I began to project bad thoughts of ‘What If’ ? Added to my angst was that the loss of vision in one eye threw off all my perception of depth and detail with my good eye. It was so distracting as I had floaters moving to the point of driving me crazy. The simplest of tasks became nearly impossible. 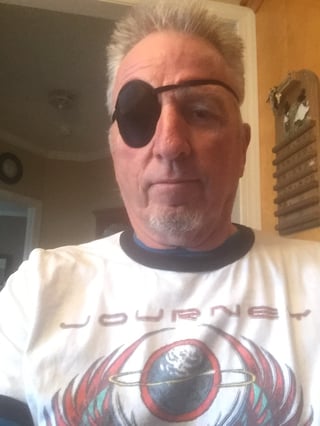 I did not feel safe driving so for about a month I only drove when I had to and only short distances. The doctor told me not to work out or lift anything that created pressure. I could not type, read or even watch TV unless I wore a patch to calm down all the crazy in that eye. In public the patch became a nuisance as everyone asked the question “What Happened” or I got the pirate jokes or even “ I think that is sexy”. Are you kidding me? I had to stop wearing the patch it in public. I became depressed and my lifestyle of full throttle activity was dramatically affected. I still fished with my buddy but he had to drive his truck, tow my boat and drive my boat. What a loss of independence. Trying to cast with my depth perception gone and tying knots ha! Forget about it!!

I had to take a break from coaching my Junior Hornets Varsity Team as I could not make the hour drive. 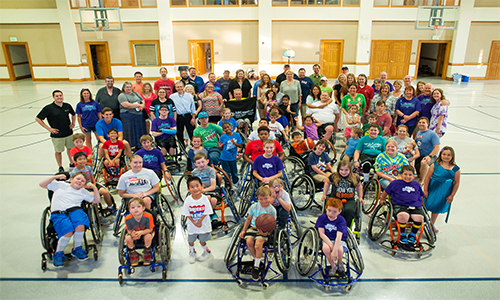 This upcoming Monday, January 9th, will be my first practice after 6 weeks.

I go back to the doctor after two weeks and he says he can operate if I want to be more aggressive but with some risk? I don’t think so man! He says if it were his eye he would wait and it should improve? Wow, two more weeks go by and still no improvement. As I write this and hen peck my way through the key board frustrated but I finally have about 25% of my vison back. Slow, slow, so slow, but at least its showing signs of progress. I am pretty sure my clouded vision and Man O War jelly fish will go away. I have a new attitude about the value of my senses, especially sight. I know there are plenty of people who have just one eye and they adjust and my hat is off to them. One eye in a wheelchair is even more of a disability as I learned. Then there are those who are completely blind and OMG I have so much respect for those who have permanent loss of vision. Like my boy LJ and all he has adjusted to.

It’s one of those things if it has not happened to you it will not make much sense. It hit home with me big time.  My God never gives me more than He knows I can handle. After I took my depression and projection for a long stroll I had to rely on my faith that I am not in control and He is… Faith !